On The Road Again: First Stop,Taiwan! 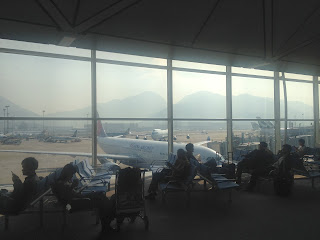 
Cathay Pacific has these great, staggered personal spaces in the upper classes of tickets. As I walked by them on my way to the back, I realized that I have never grown into the type of person who can afford to buy the first class, or even the business class plane tickets. I felt like an untouchable by the time I made it to my seat in economy - of course, the sort of untouchable who can afford to fly across the world just for fun.


Class consciousness aside, the seats on this plane are actually comfortable, have nice back support, and don’t just tip back, but sort of slide more open in both directions – both the back and the seat move. There are plenty of movies on offer, and the leg room is better than a United flight from Newark to SFO.
I spent my first three hours of the flight sleeping - trying to mimic Taipei time so that jet lag doesn't completely kick my 46-year old ass. My initial nap was interrupted twice:  the nice male steward asked if I wanted brunch; and then, sometime after breakfast was all cleaned up, my fellow travelers had a social gathering around my seat. The man behind me was talking to a woman leaning over the middle seat in front of our row; there were several people behind and in the aisles just talking away. They seemed to be having a very nice time, and because I couldn’t understand any little bit of it, I found that their voices were like an eccentric white noise machine.

I am going to arrive in a city where English is not spoken by many people. I read in another blog that the waitresses at restaurants in Taipei will literally start to giggle and laugh when they realize that a customer cannot speak Chinese – Mandarin to be more specific. All the signs will be in what looks to me like strings of pretty cuneiform-like pictures littering bus station placards and street signs.

India was a bit like that – but English is remarkably alive and kicking, especially in the larger and medium sized cities I visited there. Their written language is also quite different from ours, and I enjoyed its graceful appearance without ever understanding it.


I know that Taiwan and Burma (I am stubbornly refusing to acquiesce to the military government’s order to call Burma Myanmar) will be a challenge when it comes to communicating and getting around, finding the right bus, etc. I think that is, above all else, feeling the most daunting part of this trip right now.
Then again, I only had to make a few pantomime gestures for the gentlemen stuck in the middle seat to understand that I was going to pull a few things from my daypack before getting up again to stash it overheard. He understood so well, he grunted in irritation – that is a universal look! He very graciously, or perhaps impatiently took my bag when I was done, and put it up himself.


Then, before we took off, he and his wife (I’m assuming based on age and behavior) took out some buns and basket-weave Styrofoam wrapped pears. He very quickly nibbled off every last bit of skin from one of the pears until it was as naked as a baby’s butt, and handed it to his wife so that she could enjoy the juicy pulp sans that nasty skin – so sweet, don’t you think?

That flight was very long; about 16 hours. I had about 45 minutes in Hong Kong between flights, and then was off on my quick 1.5 hour hop to Taiwan. My whole body felt swollen, and my hands were prickly - that in between state right after a limb falls asleep. My feet were like sausages, my eyes bloodshot from lack of proper sleep, and my skin had that post-frostbite sheen. All and all, my body was in a pretty horrible and uncomfortable state of being.
Even so, my mind was remarkably light and open, a happy state of affairs given how worried I was that I might not enjoy my trip at all.


Once I decided that I would go on another great travel adventure (my last being two months in India in 2006), it took several months just to figure out where I would go. After those decisions were made, it was a frenzy of figuring out the details – cities, sites, hotels, transportation, visas, etc. I was pretty much done by the end of October, both with the planning part and the interest part.
Then, I spent about 6 weeks doing next to nothing. I took our dog Sami to the park; went to my writing group; did some cooking and a little cleaning. I also read books and watched a lot of television – and played Candy Crush up to the 91st level.


On the other hand, I must give myself kudos for submitting a short story to a journal contest, and applying for a writing fellowship. I also knitted more than a third of an afghan I’m making my girlfriend Laura.
The last week before I left was all about running around celebrating Laura’s birthday, Chanukah and Thanksgiving. I also started to hear “You must be getting so excited!” and “You’re going to have such a great time!”

Funny thing, though, I wasn’t getting excited. In fact, I felt more and more apathetic, and reluctant to finish up my final countdown checklist:  print off itineraries and reservation confirmations; pick up cash from the bank; get an oil change and a carwash so Laura can use my all wheel drive when it snows; and pack. I put it all off until Tuesday, the day before I flew out of JFK.


My apathy then turned to frantic activity and tension. I realized how nasty my mind was feeling when I snapped at my friend Kelly when she called to talk about some details about her leg of the trip (Thailand). Ugh.
When everything was packed and printed, stuffed and zipped up, I finally started to relax. As the tension started to slip away, so did the apathy – sort of like my ridiculously expensive yet so very worth it 2-step face wash regime. Wash first with the cleansing oil, and then rinse away all the sludged up detritus with the enzyme cleaner. I wasn’t excited, but as I stayed up all night in order to sleep during my day (Taiwan night) of travel, my mind started to look forward…


I feel free when I travel; I’d forgotten that one, priceless fact. I feel free  from rigid identity with my past or present – failures or glories. I get to just be another human walking around on this big planet of ours – languages like new music; vistas like new planets on star trek. Traveling is like science fiction – gives me that same feeling of discovery and adventure and wonder and “I don’t know “ or beginners  mind which can be difficult to maintain in the humdrum of daily activities at home.
Just a short note about Cathay Pacific food – the vegetarian pasta choice was sort of icky but the roll was delicious. I liked the Tao Ti Supreme Genmaicha green tea in a box covered with pretty symbols, and they and they had Haagn Daaz ice cream bars for desert. Breakfast was actually lunch - fried rice with egg and chicken, and it was okay.

I would travel Cathay Pacific again. The accomodations were better than expected (although nothing is Singapore Air), the food decent, entertainment really good, and the service was very excellent.
Posted by onecattwocats at 2:34 AM