Suffering is Relative, a short story

Another short, short story based on a photograph that a few writer friends and I do to challenge each other... 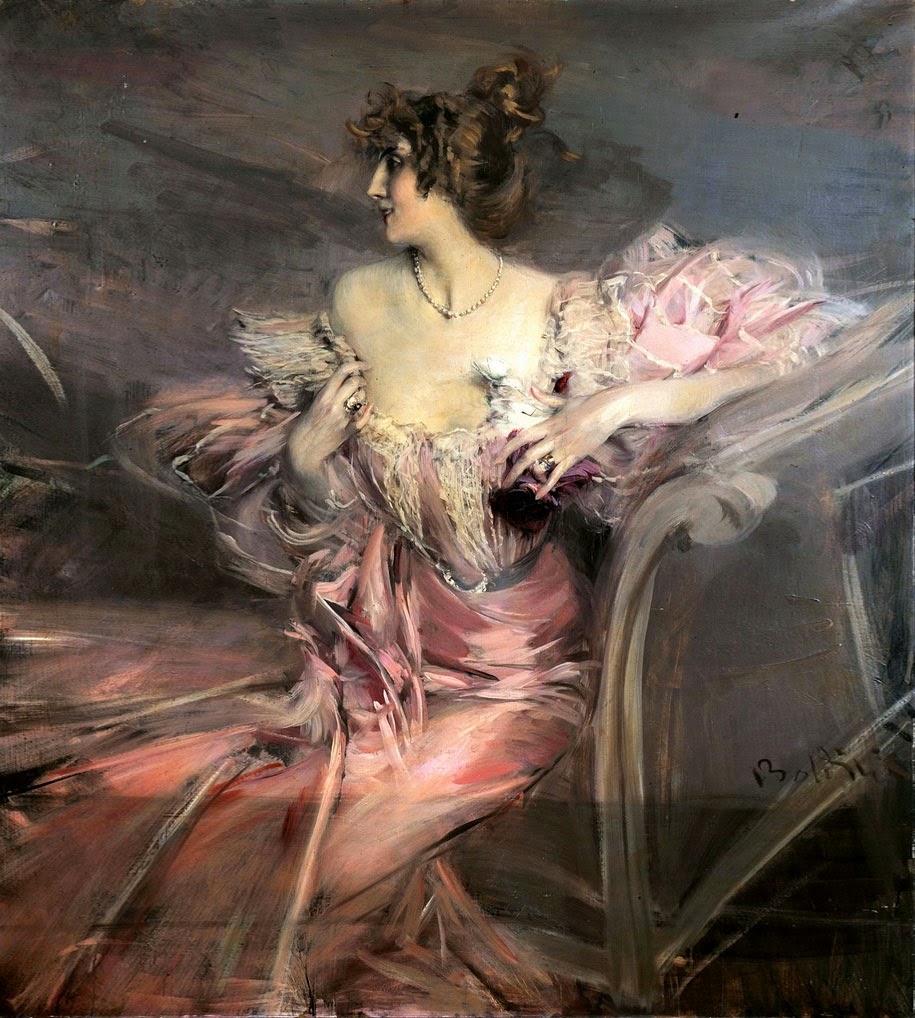 The window in front of her was clear enough to reflect the valley that reached behind her, the green hills blurring at the edges of her waning eyesight. Momentarily confused, and seeing a green, stenciled side table placed just so next to a brocade topped chair, the old woman reached out her left hand for her brush, only to find her fingertips grasping across the cold of the window’s glass.

"Ridicule." Madame de Florian let out the word in a puff of exasperation and turned away from the reflection in front of her. It was happening more and more these days. Her body had taken its time in deterioration, but her mind! Her mind had stayed with her, intact, until these last few months. It seemed to be slipping faster and faster down some ice-strewn embankment.

There were no more friends left in her life; well, no true friends. Two of her children still lived, and there were the grandchildren who had recently taken it upon themselves to all procreate simultaneously. As a result, a new flurry of young life had descended yet again into her home.

Instead of reviving her interest in the world, the latest generation pulled her slowly back into her memories. When they spoke to her, she heard words that simply did not exist in her vocabulary. New words! She felt outside of their world, these days, and it sometimes frightened her.

But of course, all humans were the same in the end, motivated by the base instincts. There would never be anything new about that. However, it seemed to her that the baser instincts had finally shed the last of their glamour in the last few decades. It was 2010. Imagine, she had more than outlived the new century, but to what end?

To her wizened mind, everything was condensing into the bottom of the universal jug. When her grandchildren had grown into young adults, and started to speak aloud of financial or fertility problems, she had tried to shush them, to explain that speaking of such things was tantamount to showing up for dinner in one’s underwear.

Her attempts to instill in them a bit of discretion only resulted in polite smiles or condescending reminders that "times have changed, Grandmaman" or one strange retort from her youngest granddaughter, Marthe, "we’re only as sick as our secrets so to hide them is to make yourself sick."

Madame de Florian chuckled a bit to herself, remembering that conversation, feeling the mirth vibrate lightly under her upper rib cage. "Mon cher, Marthe, do you know for whom you were named?"

"As I am your Grandmere, Marthe de Florian was my Grandmere."

Her granddaughter’s face had lit up. Madame de Florian knew that her consistent refusal to speak of this illustrious family descendant was, perhaps, the last bit of true power she held over her brood.

"Grandmere, you must tell me about her. She is my namesake. Someone must know her after-well-"

"After I die, little bird?" Marthe had attempted a demurral, but the gesture required too much subtlety for her generation. "Not to worry, young one, I am old, and being old, I know finally that I will die. It is ok. Not to worry."

"But-" She knew Marthe was not making another attempt to excuse her lack of charity, but was, rather, trying to get the conversation back on her track, back to her great-great grandmother. Of course, this would not end well for the child.

"Marthe, your namesake is already dead, and therefore, her secrets cannot make her sick." At that, she landed her gaze on her elderly son, Alain, and requested that he might pass her the sherry.

Madame de Florian’s ballet slippers fell softly upon the blonde stone that rimmed the Grasse villa, her home for more than 60 years. It had been the war, actually, that gave her this life; a life lived in an abundance of natural beauty and material comfort, not to mention the sincere passion she’d always felt for her Raylen. "May he rest in peace," she whispered into the early morning breeze.

For years, she’d waited for some guilt to arrive; guilt that she’d been wrapped in the silk lining of a time that for most people had been brutal and sad. But it hadn’t. Anyway, suffering is relative, she thought.

The peonies were just past full bloom, their pink petals overflowing over tight-budded centers. There was an anxiety about the peonies that Madame de Florian tried to fluff off with a smoothing of her gray skirts; she even loosened the lavender, silk scarf wound warmly about her neck, daring to expose the soft folds of skin that had lined her throat for the last 10, perhaps 15 years.

She’d left it and never gone back for it.

Why think of this now, so many years later. She turned away from the house and looked out over the pool and down into the valley, toward Nice. The rent was paid in a timely manner by her solicitor and had been for 68 years now. No one had entered the apartment on the ninth arrondissement in all those years. There had been no fires, no floods. All was well in Paris.

Even so, her breath was coming in short gasps. "Suffering is relative," she spoke out, attempting confidence but missing the mark somehow, only recalling where she’d first heard this teaching.

"Ma chere, suffering is relative to the person suffering, oui?" Her grandmother’s voice had been warm enough to play with the sunshine filling the dressing room of her apartment.

The eight year old Madame de Florian had sat in the brocade covered chair by the green, stenciled side table and watched her grandmother’s reflection in the dressing table mirror as Marthe swept her still shining, albeit mostly gray and chestnut waves onto the top of her head.

"Of course, grandmere." This had been her tentative reply. In reality, she hadn’t really understood. She hadn’t understood until she’d closed the door of that same apartment, 15 years later, leaving behind her grandmother’s possessions.

It had been war, the Nazis headed into Paris, as deadly as any epidemic, but the most dangerous moment in her life had come before the Nazis. There had been a night in the apartment that her grandmother had left to her, a night with an older man, an Italian man. She had had a pink, satin gown made and which she wore to the last ball held in Paris society before everyone who could retreat to the South had gone.

The 23-year old Madame de Florian stood in front of the dressing room’s fireplace so that the man she had invited inside would gaze both at her and at the portrait of Marthe, a portrait made of the politician's lover, the artist's muse, at 24 years of age. The man had done just that, and she'd watched his lose its social smile as he remarked on their resemblance, moving closer and closer to her until she felt her body arch into his, her arms wrapping around his shoulders and neck, his arms drawing her against him.

It was the first time she had felt the heat of a mans skin against her own; the first time that the smell of another human being became so intoxicating that she’d lost all thought. There had been a little pain, and then a great deal of pleasure passed between them during that long night, and the morning that followed. He'd left her, finally, as the sun was becoming hot, whispering into her ear, "I will miss you."

A rather sharp pain erupted suddenly down her left arm and Madame found herself hobbling to her knees in the grass before the overstuffed, pink peonies. The air had become thinner, somehow, and the pain was less discrete in its attention. Her whole chest appeared to be compressed by something heavier than anything she could adequately describe.

I’m dying, she thought. Maybe her granddaughter had been right after all; maybe the secrets she’d locked behind the door of her grandmother’s apartment were finally finding their way out. Falling into the grass, she caught what little air she could through the cement that had seemed to fill her lungs.

She had been pregnant after her night with the Italian, who had already left France, but the baby had not stayed. She’d bled through another night, some eight weeks later, and the tears that accompanied were more relief than anything else. When her family determined it was their time to escape to the South, she had quite easily left everything behind, locked in that apartment.

Suffering is relative, Madame de Florian thought, and then realized she would not be able to take another breath.


Posted by onecattwocats at 2:25 PM